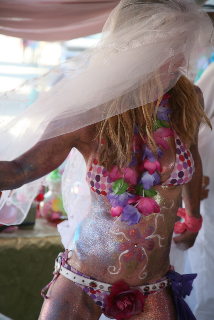 You’re Not Crazy: You’re a Woman

Call me Crazy! What’s Wrong with Being Crazy?

So one of my biggest fears has been to be perceived as a crazy woman. I’ve been called crazy by almost every man I have dated, and it’s my pet peeve. Call me crazy, but I don’t think I am the only woman alone in this matter. In fact, I believe that it’s a woman’s deepest hidden (or known) fear: to be a crazy woman. Yet after years of fearing that I was crazy, I finally embraced it, and the good news is that I think that there’s nothing crazy or bad about being crazy at all! In fact, since I have embraced my inner crazy woman and stopped being so embarrassed by hear out of control waves of emotion, energy, and passion, I realized that I’m more grounded, stable, and “normal” than ever. OK, maybe not on the outside all the time (like in my Burning Man pic above), but the energy within me feels calmer, tender, grounded, peaceful, and the waves of hormones are in balance too. I used to struggle from hormonal issues and waves of suicidal depression would hit me for a day or two each month before my period.  I had chronic acne around my chin and was afraid of feeling my emotions because I thought I would go crazy.

Before my 30th birthday I did something crazy that got me in trouble, got me arrested (it wasn’t as bad as Orange is the New Black), and I nearly lost my mind for a few months because of the stress, sleep deprivation, and trauma. But during that time I just let my feelings fly, not editing them, just feeling them.  I got so sleep-deprived that one day I called a free suicide hotline at 6am because I could barely handle the dose of crazy that I was hitting; I was told by a therapist that I should go on anti-depressants. I thought about it, but it didn’t feel like a yes in my heart.

The Healing Medicine Was to Feel

So, instead, I just let myself go into the pain, cry, and cry. And cry and cry. And talk, with family, friends, therapists. Then weep some more. Talk to the trees if I needed to. Talk to my dog. And I erupted the feelings that were welled up within me since my childhood, and perhaps something deep, ancient, and primordial for the Divine Feminine. All I can say is that it was an intense Dark Night of the Soul. What happened is that it took me many months of healing, and a slow and steady journey of feeling into my healing over a period of a few years. But slowly I have realized that I am happier than I have ever been, and that my inner crazy isn’t crazy at all! It’s a huge gift of creative force energy that is passionate for life.

So call me crazy again, but aren’t woman by our nature kinda crazy? Isn’t it absolutely nuts that we can:

Since my crazy dark night of the soul, I have created a life of crazy bad-ass miracles. I created a community of beautiful women who are following their passions. I have traveled the world, from Bali to Greece to Costa Rica. I have built a successful 6-figure BLI$$ness working 3-days per week. I have matched many women to their Twin Flames. I have given birth to Aphrodite University, the first online Divine Feminine-based university for High-Healed Priestess. So the next time you are afraid of being called crazy, or you label yourself as a crazy woman, why not think of crazy as an awesome word? Like wicked became wicked cool, or nigger became nigga’, or dyke became a term used in the LGBT community. 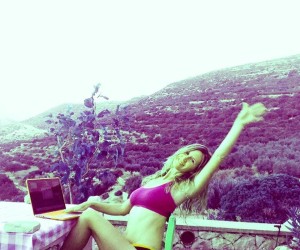 Well thank thank you, thank you very much. I do know that I am crazy sometimes, and in a good way. I love it, and I am proud. Redefining crazy is all that I needed. And the gods must be crazy too, because look at this place, it’s hilarious! Dr. Amanda Noelle is the Founder of Aphrodite University and she helps empower women to live their most crazy blissful dreams in real life.